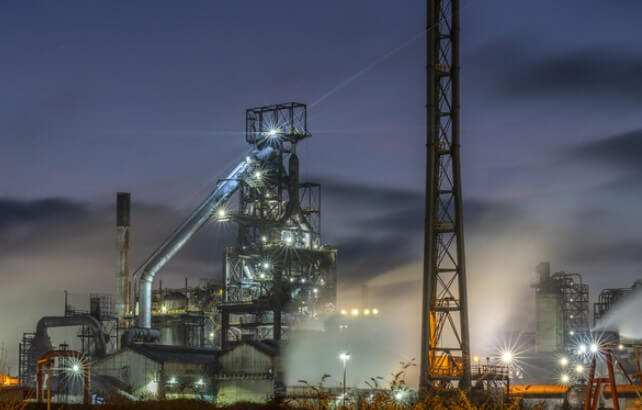 Researchers from the University of Birmingham have designed a novel adaptation for existing iron and steel furnaces that could reduce carbon dioxide (CO2) emissions from the steelmaking industry by nearly 90%.

The reduction is achieved through a ‘closed loop’ carbon recycling system, which could replace 90% of the coke typically used in current blast furnace-basic oxygen furnace systems and produces oxygen as a biproduct.

The novel recycling system captures the CO2 from the top gas and reduces it to CO using a crystalline mineral lattice known as a ‘perovskite’ material.  The material was chosen as the reactions take place within a range of temperatures (700-800°C) that can be powered by renewable energy sources and/or generated using heat exchangers connected to the blast furnaces.

Under a high concentration of CO2, the perovskite splits CO2 into oxygen, which is absorbed into the lattice, and CO, which is fed back into the blast furnace. The perovskite can be regenerated to its original form in a chemical reaction that takes place in a low oxygen environment, and the oxygen produced can be used in the basic oxygen furnace to produce steel.

Devised by Professor Yulong Ding and Dr Harriet Kildahl from the University of Birmingham’s School of Chemical Engineering, the system is detailed in a paper published in the Journal of Cleaner Production, which shows that if implemented in the UK alone, it could deliver cost savings of £1.28bn in five years while reducing overall UK emissions by 2.9%.

He said, “However, an electric arc furnace plant can cost over £1 billion to build, which makes this switch economically unfeasible in the time remaining to meet the Paris Climate Agreement.  The system we are proposing can be retrofitted to existing plants, which reduces the risk of stranded assets, and both the reduction in CO2, and the cost savings, are seen immediately.”

The process is inherently carbon intensive, using metallurgical coke produced by destructive distillation of coal in a coke oven, which reacts with the oxygen in the hot air blast to produce carbon monoxide.  This reacts with the iron ore in the furnace to produce CO2. The top gas from the furnace contains mainly nitrogen, CO and CO2, which is burned to raise the air blast temperature up to 1200 to 1350°C in a hot stove before blown to the furnace, with the CO2 and N2 (also containing NOx) emitted to the environment.

The new system can be retrofitted to existing furnaces, with the addition of an array of additional gas separators and heat exchangers required to support the perovskite splitter.

Iron and steelmaking is the biggest emitter of CO2 of all foundation industrial sectors, accounting for 9% of global emissions.

University of Birmingham Enterprise has filed a patent application covering the system and its use in metal production and is looking for long-term partners to participate in pilot studies, deliver this technology to existing infrastructure, or collaborate on further research to develop the system.

The UK Government is offering around £300m to Tata Steel to decarbonise its Port Talbot operations, although that falls far short of the steel major’s demand of £1.5bn aid, according to reports. A similar amount is earmarked to support the decarbonisation of British Steel’s Scunthorpe primary steel plant.

Adopting carbon capture and storage (CCS) or CCU technology in existing blast furnaces would add operational expenditure of approximately €100 per tonne of crude steel, and hydrogen-based steel production would cost approximately €170 per tonne of crude steel. By 2050, with increases in scaled hydrogen production and carbon taxes, hydrogen-based steel production, CCS and CCU will provide competitive options for steelmakers, according to Mckinsey.

“Looking toward the long-term horizon of building or retrofitting industrial sites, significant emissions reductions can be achieved more efficiently through investment and plans initiated now,” it concludes.

Countries to report on green steel and hydrogen at COP28