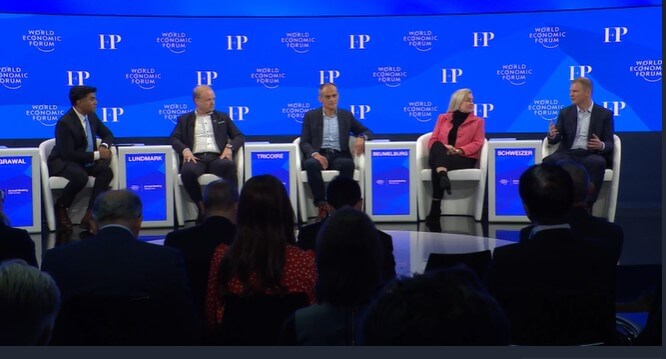 Accelerating the adoption of new technology and placing digital at the heart of the energy industry were key discussion points at Davos 2023 today.

Speaking at the Twinning Energy with Digital panel, Jean-Pascal Tricoire, Chairman and CEO, Schneider Electric, underlined energy’s key role in decarbonisation, saying its production and consumption – while the former is much scrutinised, the latter often is overlooked – account for 80% of emissions.

“The world is speaking about energy only on the supply side, but in the history of humanity, energy transitions happen because of the demand side,” he said. “We’re at the beginning of the transition with IoT, big data, AI, smart energy and electrification coming to maturity at the same time. A lot of homes will become self-powered and buildings have their own microgrids. Digital and electrification will bring back the responsibility of decarbonisation to all of us.”

Data sharing will become increasingly important to contextualise business and operations, he added. “We tend to take a long time to adopt technology – we have to move faster. But to be optimistic, our business is growing solid double digit.”

Katharina Beumelberg, Chief Strategy and Sustainability Officer, Schlumberger, said, “If you look at oil and gas, the main sources of emissions are methane and flaring, and both these problems can be tackled by digital solutions. It takes time to get technologies certified, but I wouldn’t say it’s that slow – it could be faster if the world was less fragmented. We’re on a pretty fast pace and I have very high hopes that we can decarbonise major parts of the energy system.”

She added that the entire topic, covering carbon capture and storage (CCS) and other new technologies, will only be possible with digital as an enabler.

“It starts with bringing the transparency, so we know where the emissions are happening, and then creating technology pathways. Currently the digital systems in the energy arena are very fragmented so it’s difficult to bring it all together. We’ve just announced a partnership with Aramco on a digital sustainability platform. This entire question on how data is shared, and the value of shared data for driving the energy transition, is something governments have to form an opinion on.”

Pekka Lundmark, President and CEO, Nokia Corporation, said the energy transition is a connectivity challenge, evolving from centralised systems to decentralised ones. “It becomes a digital challenge, and while the Metaverse term is over-hyped, it will be a significant part of the answer, because there will be a time when we will see a digital twin of pretty much everything on the industry side. It’s not only about power and electricity generation, but decarbonising industrial processes.”

He said financing will be beyond the remit of public sectors, meaning the private sector will need to step up. “There is more than enough capital available in the world if we have the right incentives in place – they should be market driven. My favourite example is the Emissions Trading System, which has been working very well – in a perfect world we would create something similar.”

“I don’t see any country that’s ready for this workforce revolution,” he said. “It will take comprehensive public and private partnerships, as well as changing core education in schools and colleges, and upskilling workplaces. It’s going to be the next stage of constraint.”

Speaking at a separate one-on-one presentation, Microsoft CEO Satya Nadella said the challenge was compressing “about 250 years of chemistry into 25 years”. The tech giant’s energy role covers everything from AI supercomputers to new areas such as carbon accounting – and it faces challenges of its own, with scope 3 emissions increasing through growth in the Cloud (Q3 2022 sales increased $3.9bn) and sales of Consoles.

“We’re doing a lot of work, whether it’s AI techniques or quantum inspired algorithms, to help with chemistry and discovery of new molecules that can perhaps accelerate this energy transition,” he said.

Earlier Antonio Gutteres, UN Secretary General, issued emotive calls to action, echoing his speech at COP27, saying the world was now in a “category five hurricane”; the challenges would be difficult to tackle at the best of times, he added, but now there were multiplying issues, including a widening divide between the global north and south.